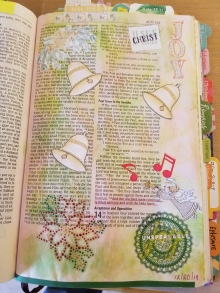 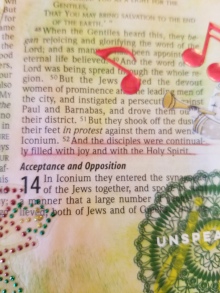 Today’s Bible Journaling verse isn’t thought of as a “Christmas verse”, but it shows something that I think many may not realize. Our verse today is Acts 13:52, “And the disciples were continually filled with joy and with the Holy Spirit.” (NASB) When I read this verse, I immediately thought of a verse we hear at Christmastime when we see a Christmas play or read the Christmas story, “When they saw the star, they rejoiced with exceeding great joy.” (Matthew 2:10 (KJV) The Wisemen were rejoicing because they knew they had found Jesus!

In today’s verse, the disciples have been in Antioch preaching. The Apostle Paul is preaching to a crowd and the Jews saw the crowds that were gathering to hear what he had to say. The Jews were very upset, and the Bible says they were filled with jealousy and began to contradict everything Paul and Barnabas said. (Acts 13:45) Paul and Barnabas spoke out boldly (Verse 46) and said, “It was necessary that the word of God be spoken to you first; since you repudiate it and judge yourselves unworthy of eternal life, behold, we are turning to the Gentiles. For so the Lord has commanded us, ‘I have placed you as a light for the Gentiles, that you may bring salvation of the end of the earth.’ When the Gentiles heard this, they began rejoicing and glorifying the word of the Lord; and as many as had been appointed to eternal life believed.” (Acts 13:46-48 NASB) The chapter goes on to say that the Word of the Lord was spread out throughout the whole region. What I love about our verse today is that it says the disciples were continually filled with joy! That’s what happens when Jesus is in our hearts and lives!

He is the source of our joy. Just as the Wisemen rejoiced at finding Jesus, and the disciples were joyful at believing and accepting Jesus into their hearts, we also can be filled with that same joy. Jesus is the source of our joy. Why? Because it is through Him that we receive eternal life. He fills our hearts with joy, despite difficulties in our lives. Even though we are burdened down, we can still have joy in our hearts. We may not be happy when the world seemingly comes against us, but we can have a deep, abiding joy!

Paul and Barnabas were rejected by the Jews, in fact later in the chapter it tells of how the Jews “incited women of prominence and the leading men of the city” to persecute them and drive them out of the city. (Verse 50) The Bible says Paul and Barnabas shook the dust of the city “in protest against them” and went on to another city. (Verse 51) Even then, the disciples were “continually filled with joy.” Though they were persecuted, they were filled with joy. Only God can do that!

When the angels announced Jesus’ birth, they declared, “Do not be afraid; for behold I bring you good news of great joy which shall be for all the people, for today in the city of David there has been born for you a Savior, who is Christ the Lord.” (Luke 2:10-11 NASB) Even the angels proclaimed that there was joy in Jesus, in His birth, in His life, in His death, and in His salvation for the world!

We can have that joy, right now! The Bible tells us that Jesus came for a purpose. He was born to die! God’s plan was formed at the foundation of the world; Jesus would come into the world, live, teach and preach about God’s love, become the sacrifice for our sins by dying on a cruel cross, be buried, then three days later rise again and conquer sin, death, Hell, and the grave. He then ascended to Heaven to live with His Father. He made a promise to us. He is coming back to take His children, those who have accepted Jesus into their hearts, back to Heaven to live and reign with Him. There is great joy in knowing that Jesus loves us that much! He has promised to never leave or forsake us (Hebrews 13:5) and for me, that brings great joy!

I am trying a blog for the first time in my life, and frankly, I feel like I don't have a clue as to what I'm doing! But, here goes. I work at a Christian Television network in the Correspondence Department, where I write letters and emails to our viewers, pray with them for their needs, and send materials they request. I am a Christian. I was saved at the age of 11 during a youth meeting at my church. My pastor led me to the Lord, and to say the least, my life has been an adventure. I am a widow. My late husband, Allen, passed away after 34 1/2 years of marriage. He had been sick the last seven years of his life, and it was a struggle, for him and for me. We met as part of a singing group that was affiliated with a Christian Radio station, and we sang together all through our lives together. We both worked in television and radio all through our married life, mostly for Christian stations. Besides singing I also play flute. I had the luxury of having parents who started out as music teachers...so music was in our house constantly. Some people describe me as being a loud-mouthed lime type...can't disagree with that. I have a tendency to put my foot in my mouth more times than I can count! I also have a tendency to say exactly what's on my mind...which is why I get myself in so much trouble! LOL! Trust me, that's something me and God have been working on for a very long time. I have no children here on earth, although I have a baby in heaven. My baby here is my dog Jack. He's a black lab/ chow mix. He's a big boy....thinks he's a lap dog! Can't think of much else to say. The reason I started this blog is because a few months ago in church, a guest pastor came and delivered a message, and when he asked for those of us who wanted prayer to come forward, I did. When he came to me he asked me if I did any journaling. I told him no 'cause I wasn't very good at it. He told me to start, and prophesied over me that my journal thoughts would impact other people. I wasn't sure just how I was to go about doing this. In fact, I was a little hesitant at first. I started journaling at home, and our assistant pastor's wife asked me to submit something for our Senior newsletter. I didn't the first edition, but something I had heard on Christian radio a long time ago and has stuck with me all these years, came to mind so I submitted an article. That article will be my first post. I don't claim to have all the answers, and my thoughts may seem a little "out there", but I feel God has been prodding me to do this, and so here I am. I hope what I post will bring encouragement, and "Something to Think About". View all posts by Donna Knuth Rice