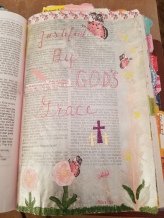 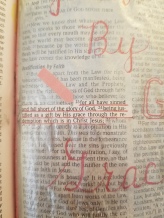 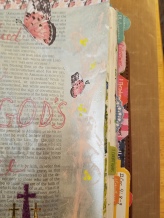 Today as we continue to look at grace, we look at Romans 3:23-24, “For all have sinned and fall short of the glory of God, being justified as a gift by His grace through the redemption which is in Christ Jesus.” (NASB) Remember, we said that grace was unmerited favor. Another word in our verse that many may not know the meaning of is justification. Another way to think of it is, “just as if I had never sinned.” When God looks at us through the blood of Jesus Christ, He doesn’t see our sin He sees Jesus’ sacrificial blood. He sees us as pure and holy before Him.

Sin has a penalty…death. Romans 6:23 says, “For the wages of sin is death, but the free gift of God is eternal life in Christ Jesus our Lord.” Justification and God’s grace takes care of the penalty of sin for us when we ask Jesus to be our Lord and Savior and live inside of us. When I was younger, I was studying to be an LPN. I had a rotation in my schooling where I had to work on the floor of a psychiatric hospital. We had one patient who walked the floor mumbling the first part of Romans 6:23 over and over. She was obsessed with the idea that she had sinned and deserved death. Another student, who was also a Christian, and I tried to help her remember that there was a second part to that verse, that Jesus had paid the price for her sin. I firmly believe that our patient was a Believer, but Satan had distorted her mind so badly that all he let her remember was that she was a sinner and it completely destroyed her. She didn’t have the assurance that God’s grace had justified her and that she was a child of God.

Many walk this earth with that same fear. They know that they have sinned, and they don’t have the assurance of knowing that if they only would ask Jesus to save them that they would be justified in God’s eyes because of His grace over them. Satan takes advantage of that and he keeps people in bondage, gripped in fear that there is no hope for them.

Our current crisis is a case in point. People are running around in fear that they will die from this virus, and many most likely don’t have a relationship with God. They don’t know that God will grant favor upon them when they put their full faith and trust in Him. They don’t know that He will place a hedge of protection around them, they don’t know that He loves them so much that He is “not willing that any should perish, but that all should come to repentance.” (2 Peter 3:9 KJV) God’s grace is evident in the way He is so patient with us. He calls to us time and again, asking us to repent and turn back to Him. He beckons us lovingly desiring us to have a relationship with Him.

What happens when we accept Jesus as Savior and Lord? We are forgiven of our sins, past, present, and future. We are made a part of God’s family and we become heirs of God. Romans 8:16-17 says, “The Spirit itself beareth witness with our spirit, that we are the children of God: And if children, then heirs; heirs of God, and joint-heirs with Christ; if so be that we suffer with him, that we may be also glorified together.” (KJV) We are children of God, and God extends His grace to us every single day. When we fall short and sin (and we will because we are human) and then confess our sins, He forgives us. (1 John 1:9) We are assured that God’s grace covers us daily. As we walk the pathway He has planned for us we find that we are changed, circumstances change, our outlook changes, all for the better. We are free from the fear of sin’s penalty and we can rest in the assurance that God’s grace holds us.

I am trying a blog for the first time in my life, and frankly, I feel like I don't have a clue as to what I'm doing! But, here goes. I work at a Christian Television network in the Correspondence Department, where I write letters and emails to our viewers, pray with them for their needs, and send materials they request. I am a Christian. I was saved at the age of 11 during a youth meeting at my church. My pastor led me to the Lord, and to say the least, my life has been an adventure. I am a widow. My late husband, Allen, passed away after 34 1/2 years of marriage. He had been sick the last seven years of his life, and it was a struggle, for him and for me. We met as part of a singing group that was affiliated with a Christian Radio station, and we sang together all through our lives together. We both worked in television and radio all through our married life, mostly for Christian stations. Besides singing I also play flute. I had the luxury of having parents who started out as music teachers...so music was in our house constantly. Some people describe me as being a loud-mouthed lime type...can't disagree with that. I have a tendency to put my foot in my mouth more times than I can count! I also have a tendency to say exactly what's on my mind...which is why I get myself in so much trouble! LOL! Trust me, that's something me and God have been working on for a very long time. I have no children here on earth, although I have a baby in heaven. My baby here is my dog Jack. He's a black lab/ chow mix. He's a big boy....thinks he's a lap dog! Can't think of much else to say. The reason I started this blog is because a few months ago in church, a guest pastor came and delivered a message, and when he asked for those of us who wanted prayer to come forward, I did. When he came to me he asked me if I did any journaling. I told him no 'cause I wasn't very good at it. He told me to start, and prophesied over me that my journal thoughts would impact other people. I wasn't sure just how I was to go about doing this. In fact, I was a little hesitant at first. I started journaling at home, and our assistant pastor's wife asked me to submit something for our Senior newsletter. I didn't the first edition, but something I had heard on Christian radio a long time ago and has stuck with me all these years, came to mind so I submitted an article. That article will be my first post. I don't claim to have all the answers, and my thoughts may seem a little "out there", but I feel God has been prodding me to do this, and so here I am. I hope what I post will bring encouragement, and "Something to Think About". View all posts by Donna Knuth Rice